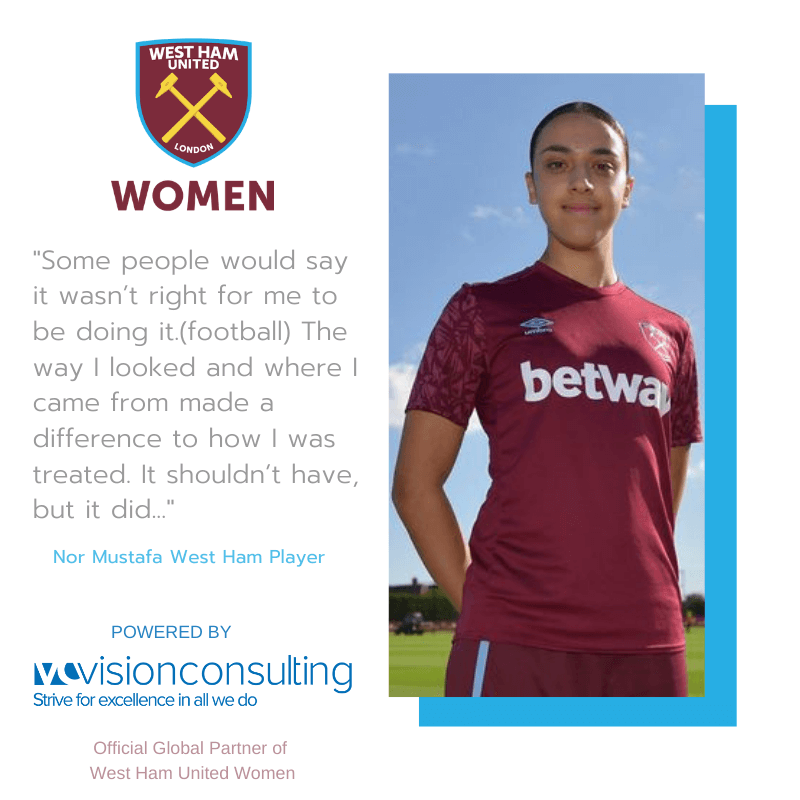 RISING TO THE CHALLENGE

A move away from home, a new style of football, a global pandemic. None of it is going to stop Nor Mustafa…

Transferring to a new football club for the very first time always brings trepidation, for any player. Add into the equation the challenges of moving to a new country, and adapting to a new culture, at the very same time, and an exciting yet slightly daunting situation becomes apparent.
Now imagine having all that going on while in the midst of signing the first professional contract of your young career and moving away from your home, your family and your friends for the very first time. In the middle of a global pandemic.
You would be forgiven for being even the slightest bit nervous.
Nor Mustafa was not nervous though. She was excited, hungry, determined to seize the chance.
“It’s a real sacrifice, coming to a different country and moving away from your family. It’s a new culture. But I always try to keep in my mind the reasons behind why I am here, why I am making those sacrifices. I am here for my football, and my family are really supportive of that.”

Nor swapped the south east of Sweden for east London when the young striker signed for West Ham United in the summer, achieving her life-long ambition of becoming a professional footballer.
Due to the ongoing COVID-19 pandemic restrictions, the 18-year-old has not been able to see as much of her new home as she would have liked, but Nor is adapting to live in England.
“I think I am settling in really well. I am very happy here at West Ham,” she said. “I talk to my family and friends on the phone or over the internet when I’m missing them. It’s not the same as seeing them as in person or being around them, but it definitely helps.
“There is a reason I am here, a bigger reason, and I try to keep looking at it from that bigger perspective. It helps to makes the problem smaller too.
“London is a very multicultural city, so I’m settling in really well and it’s been really easy to find my feet.
“With the pandemic, there are obviously restrictions on what you can and you can’t do, but I’ve been able to get around and see the sights a bit. I’ve been able to get to Oxford Street. I was able to go and have a look at the London Eye, and I’ve also been to Big Ben. Of course, Big Ben is under construction at the moment, so there’s not much to look at!
“Hopefully, when things calm down and get back to normal a bit, I will be able to go out and experience London a bit more and get to know the city.”

Living in London, as a professional footballer, is vastly different to the life Nor knew as a young girl at the very beginning of her journey. A story that started on the streets of Eskilstuna, as the striker played and kicked a ball around with fellow kids outside her home.
The daughter of Kurdish parents, growing up in Sweden, Nor did not look like other girls her age. She was aware she was not looked at in the same way as others.
“I’ve always loved football,” she reflected. “When I was young, I would play football with the boys outside in the streets. That is where everything began for me. I loved playing football so much.
“Some people would say it wasn’t right for me to be doing it. The way I looked and where I came from made a difference to how I was treated. It shouldn’t have, but it did. I didn’t look like the typical Swedish girls, and it was hard for me because I was treated differently.
“But I’m the type of person that wants to prove people wrong if they don’t believe in me. I love football so much that I kept playing, regardless of what people said. I started playing in a girls’ team and I kept developing. I had to believe in myself and, because I did that and blocked out the negative energy, it worked for me.”
Nor would not be denied her dream. Over time, she developed, as did women’s football, and the youngster is delighted to be on the journey.
“I’ve always had the dream of being a professional footballer but even just a few short years ago, it felt so far away. I always thought I would need to get an education and then get what you might call a ‘proper job’.
“My dream always seemed so far away but, with time and work, I’ve got better and women’s football has also got bigger, better, and is getting the exposure it should have always had. I’m just happy to be a part of helping to grow it even more.”

Nor has made four appearances in all competitions so far this season for Matt Beard’s Hammers, and is already noticing the step up in quality between football in the Barclays FA Women’s Super League and back home in Switzerland.
Not that the forward is deterred by this challenge.
“There is a big difference between the Swedish leagues and English football,” Nor considered. “Here, it is much more physical, more demanding, and a much quicker tempo. But I’m a physical player, so that part really hasn’t fazed me too much. I enjoy that part of the game and I’m used to it.
“I’m used to the physical challenge and it’s fun to try myself out in England. When a defender wants to try and challenge me, I look forward to standing up against them and having that battle.
“My teammates are learning in training too! They are backing up a bit. In the beginning, they didn’t realise how physical I am. They would try to challenge me, but now they don’t!”
Aside from showing off her strength on the training pitches at Chadwell Heath, Nor is learning from some of the league’s most experienced attackers. The likes of England international Rachel Daly, Canadian winger Adriana Leon and Scotland international Martha Thomas are all helping the No11 to improve on a daily basis.
“It’s been really helpful and I’m very grateful to be around these kinds of players. I’m learning new things every day and, just being in the same group as players of this quality, has been so important for my development.
“They are all pros who have played at the very top level, and they all take the time to encourage me, talk to me, help me to get better. I’m really grateful to them.”

Although still only a teenager, Nor has lofty ambitions, both for herself and West Ham United. The first target: win this evening’s match against Reading, and then go on to claim the Women’s Continental League Cup.
It’s the next step in Nor’s journey to being the best she can be.
She added: “We’re going into this match against Reading with every determination to win the game. We are going to give absolutely 100 per cent and we all believe we have a great chance to get out of the group and go the whole way in the competition. We have a really good group of players here, and I truly believe we can do it.
“I have big ambitions. I want to be a household name in women’s football. I want to be one of the best players in the world. I want to win championships, represent my national team, and be at the top level.
“That’s my dream and I think, with West Ham’s help and with the help of my teammates and the coaches around me, I really believe that it is possible.”