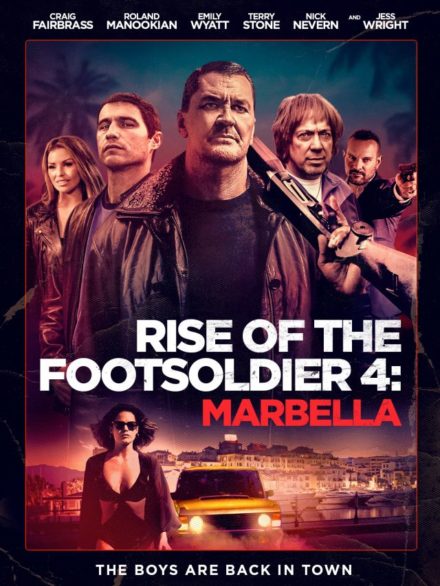 The Vision Consulting team attended the premiere of the highly anticipated ‘Rise of the Footsoldier 4: Marbella’, at the Marbella International Film Festival.

Terry Stone, who plays the character Tony Tucker in the film (main cast), stated the latest instalment is still a violent crime film, but that it would appeal to a lot of people. He joked: “It’s like Only Fools and Horses meets Scarface.”

Rise of the Footsoldier is a British crime film series and is a production by BAFTA Award-nominated director Julian Gilbey. Based on the true story of the 1995 Rettendon murders and the autobiography of Carlton Leach, a football hooligan of the infamous Inter City Firm who became a powerful figure of the English underworld.

Billed as Britain’s answer to Narcos, the movie was filmed around locations including Cabopino Port, La Quinta Hills in Benahavís, Aloha Pueblo, the Golden Mile and the old Heaven Beach Club in Estepona. Thus making the Marbella Film Fest the perfect launch platform and pay homage to the regions links with the film.

Terry explained: “Most people like crime films whether they live that life or fantasise about living that life, or they just enjoy it as an escapism. If you look at Martin Scorsese, gangster films have been around for so long, even the black and white one such as Humphrey Bogart, so for decades there’s been a fascination with crime and gangsters. If you make a good film, people will watch it.”

Vision Consulting Director Ghulam said; ‘It’s an entertaining movie, thank you to Terry for inviting the team and our clients to the Premiere in Marbella. I’m sure the public would lvoe the movie.’

Check out some scenes from the big night below:

ESSEX IS RUNNING LOW ON PILLS! Fresh out of prison, Pat Tate (Craig Fairbrass) steps right back into his Essex nightclub business. But although the money is good, he can’t stop brooding about the man who had him put away. It’s not long before he’s off to Marbella to find Frank Harris and seek his revenge. But Harris is long dead and the middle-man Terry Fisher (Andrew Loveday) offers Pat the biggest drug deal of his life. All Pat needs is for his pals Tony and Craig to deliver the cash from Essex to close the deal. But Craig being Craig, turns a simple plane trip to a mental road trip. All Tony wants is to make it back in time to support his friend Nigel Benn at the boxing match of his life.

But when their cash gets stolen and Pat is threatened by a local firm, he comes up with an audacious plan to get them back to England in time for one of history’s greatest fights…

Hammers, knives, crossbows and good old-fashioned fists are making their comeback in this iconic British crime thriller starring the original loveable-rogues Craig Fairbrass and Terry Stone in Rise of the Footsoldier 4: Marbella.

The boys are back in town from 8th November in cinemas. HERE’s the new trailer.

Find out more about the Marbella International Film Festival HERE